I'm sick of the state of the streets around plumstead..dog shit, spit, rubbish etc. The way they tarmaced the roads etc. Walk from the common to the station and it rapidly gets worse.

Ablairs treat Ennis road as though it's part of their yard. Dodge the forklift as you pass by.

The majority of people round here are chavs and drink 'tinned' lager.

I want to live in greenwich and the sooner I get enough money I'll be moving.

Oh and the ship? It's a shit hole -the owner hasn't a clue.

I can't disagree with you about the streets. Walking to the train station on a morning, I am also gob-smacked by the amount of detritus littering the pavements. Dropping litter is a bug-bear of mine. It's so easy to find a bin, and if there's no bin, then wait 'til you get home. Littering is a brilliant way of keeping the rat population up. [Rant over] I don't know why the streets are less tidy down that way though. Is it the residents? Is it the commuters? Does Griffin Road have hyper-active foxes? Like The Plumster said, just contact Cleansweep. If they don't know about it, they can't deal with it.

It might be annoying when Ablair is loading/unloading, but they definitely don't do it to annoy the people of Plumsteadshire. I've only had good service when buying a handful of 3/4" no 8's.

The majority of Plumstead Common residents are chavs? I must be walking around with rose-tinted spectacles or I've not wandered to the bad side of town. Yes, I've seen the odd yoof in the day-time taking a libation, but the vast majority are probably at work.

I wouldn't say no to Greenwich either, but certainly couldn't afford the prices. Anyway, I've lived in Blackheath with the nouveau riches and there was a severe lack of community spirit there. Being judged by your bank balance and car isn't high on my list of conversational topics.

Plumsteadshire does have many faults, but for me these are greatly out-weighed by the many strengths.

So lovely listeners, do you agree with the anonymous resident?
Is it time to get out?
Posted by Doctor Pangloss at 9:48 pm 17 comments:

New kid on the block

There's a new discussion forum website for Plumstead Common. It's new, it's exciting and here.

Good luck with the site. It's just what the people of Plumstead Common are looking for.

Just a little note though. With regards recommending builders, plumbers, candle-stick makers etc, you should post up a disclaimer as this is easily open to abuse as any bodge-it-n-scarper could recommend their own 'skills' on your site. This is one reason I've held back from having a recommended trades page.

Pangloss looks forward to your contributions to building on the Plumstead Common community.
Posted by Doctor Pangloss at 9:34 am 5 comments:

Over the past month or so, I've noticed Chinook helicopters around London; they're really distinctive as they have two rotor blades. Maybe they've always flown around London but never really noticed them, or are we on high terrorist alert?

Still, they're kind o' pretty in a 'troop-carrier-war-machine' sort of way.
Posted by Doctor Pangloss at 10:17 am 7 comments:

Will it continue to be a regular feature of this blog to write reports on local residents who might be mentally ill - or perhaps mutter to themselves, or maybe have nervous ticks, or who are just plain eccentric - for the purposes of ridicule and public amusement? Just curious.

If you want to comment like this, then be brave and tell us who you are. You have the choice NOT to read this blog. If I offend you then I apologise, but I would prefer to blog about the characterful side of the Parish. You are very welcome to start your own blog and write about drying paint.
Posted by Doctor Pangloss at 7:01 pm 16 comments:

Thanks to the lovely listeners who have taken part in the Plumsteadshire Feedback Forum, more commonly known as blog comments. It is this interaction that makes writing Plumsteadshire so enjoyable.

I am still brain-storming ideas with the Plumsteadshire Creative Team about a possible website, but it's a long way off yet. I have a variety of ideas ranging from useless facts to useful tradespeople, but definitely don't want it exclusively about pubs.

Speaking of which, the general consensus on The Ship is that it is crap. As I had pointed out before, the (interior & exterior), design is non-existent and it sounds like the atmosphere is pretty frosty too. I'm going to pop in to check it out myself at some point. I think I'll let it settle a little before I do though; let Mr Patel iron out the little creases before I go for a Bishop's Finger.
Posted by Doctor Pangloss at 8:10 pm 5 comments:

So this morning, I look across The Common. It still had a good smattering of icy snow, not like the dense duvet-like stuff from earlier in the week, no it was dotted about, just enough so that a walker could see if a dog turd lay on the grass.

Whilst surveying this green and pleasant patch, I saw a mad man.

A fellow dressed in tracksuit bottoms and woolly hat was jogging about whilst punching the freezing cold air. He wasn't even doing this in a discreet manner, he was along the path merely yards from Plumstead Common Road - at rush hour!!!!

Care in the community (doesn't exist - ed.), or the next welter-weight champion of Welling? He was there for quite some time, jogging about, punching the air, dancing around trees and shadow boxing with them. The highlight of his display were his under-whelming high kicks. He'd stick out his hand at high level and kick his legs up. His feet came nowhere near his hand and I'm sure his legs should be straight too; Steven Segal's legs were straight when he demonstrated that he's much more than a chef in that seminal classic, Under Siege. 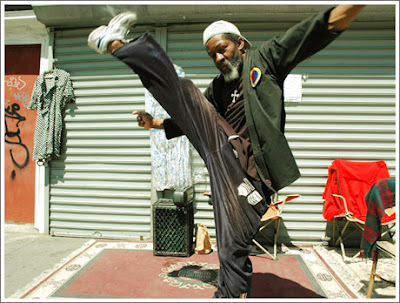