Listening to the crystal set yesterday, I was enjoying the weather forecast when the weatherman suffered a slip of he tongue. I had to cover my ears in the hope of not hearing any more colourful language however this left him in fits of laughter on air. Real Denis Norden stuff.

I'd just like to ask if anyone knows of an alternative (and reliable), supplier for a telephone/broadband service. I'm with BT at the moment and paying a lot of money just for the standing charge.

Thanks in advance.
Posted by Doctor Pangloss at 9:24 am 15 comments: 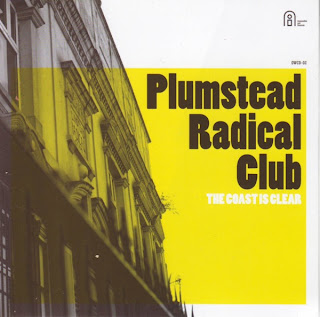 My partner in crime has pointed me in the direction of the Plumstead Radical Club; the jazz band, rather than the imposing building opposite Plumstead Railway Station.
I've had a listen and instantly addicted. I've listened to the track 'One Way' again and again just like I'd taped it off the Top 40 on the wireless. The Plumstead Radical Club have an album out called The Coast Is Clear and I'm sure it's available in your local record store. Well, they don't really exist anymore so it'll be a trip up to Rays Jazz Store. Ahh. That doesn't really exist anymore either. It's now just tucked away in Foyles Bookshop. In my humble opinion, just not a proper record shop.
Well, I don't know if the jazz band are from this leafy suburb or not, but I'd like to know more about them. I must do the modern thing and buy their album on iTu........ Hmmmmm. Interesting. I typed Plumstead into iTunes, hoping to find jazz, but instead am watching a handful of Open University programmes about our dear Plumstead constabulary.
Well, if the PRC are local musicians then I wonder if they're taking part in the Plumstead Live! event. I do hope so.
Posted by Doctor Pangloss at 9:16 pm 4 comments:

My post bag has been bulging this week with requests for information about a train I recently mentioned. That being the one near Falconwood.
Well, it sounds like a bit of an unknown gem in these here parts o' the shire.
The train is run by the Welling & District M.E.S. (model engineering society to us common folk), and it sounds like they'll be evicted from the Falconwood site next year. Boo. Here are the open days:-
14th & 28th June 2009
12th & 26th July 2009
9th & 23rd August 2009
6th & 20th September 2009
4th October 2009
They aren't open the public apart from these dates, so do go along sooner rather than later as you know you'll just keep saying 'ah, I'll go next fortnight', and so on and so on until it's 5th October and that's it. Gone forever.
On these days, they open between 2pm - 5pm. Last orders at 4.30pm.
Here's a funny new-fangled map to locate the train.
View Welling & District M.E.S. in a larger map
Posted by Doctor Pangloss at 10:05 pm 6 comments: 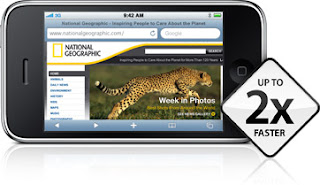 The new generation of the gadget of all gadgets, the one and only iPhone, has been announced. The iPhone 3G S. It pretty much follows the rumours that have been bandied around on the blogosphere and maybe that is why I'm still slightly under-whelmed.
The trouble with technology is that it advances so quickly that it's hard to keep up. In trying to keep up, we expect the next big thing to leapfrog the last big thing, well I do anyway. Given that there are phones out there packing 8 mega pixel cameras and the 3G S offers just 3 is one disappointment; one key reason for me to have held back from spending lots of cash and changing phone provider. Even so, I'll have to remind myself one thing. Rather than judging the iPhone on the amount of features and how it'll fare against the competition, I'll appraise it's usefulness for my needs.
I'm not keen on the polished finish though. I like my current phone because I can throw it in my bag and not worry about it getting scuffed. For me, the thing is to be used, not a fashion statement.
Posted by Doctor Pangloss at 8:27 pm 4 comments:

A vibrant part of suburbia

I had a really pleasant and eventful weekend. Normally, we'd be day-tripping to far off lands in deepest Kent and Sussex but this weekend was purely Plumsteadshire. Of course, Saturday was the Make Merry, an event which I feel should be more reminiscent of maypoles, sheep driving and smocks rather than a parade of unmuzzled dogs. However, I really like the utterly terrifying clowns which look like they hail from an Edwardian side-show.
Being a key part of the local social calendar, I bumped into alot of friends at the Make Merry and it was this feeling of a community hub that makes the Make Merry special and essential.
In the evening, I went to the comedy night at The Pavilion (AKA the rugby club), and it was an utterly brilliant night out. The comedians were top notch and the audience were very receptive. I really do love the Pavilion space as it's intimate and you're engaged with the performers. I can see it working as a film club venue. I'll try and look into the viability of this idea. My idea is not for another outlet for mainstream Hollywood tosh, but to screen classics, Saturday morning Laurel and Hardy children's club, Woody Allen Wednesdays, David Lean Sundays. Might be cost prohibitive, but you get the idea.
Today, I went to the model railway exhibition at the Firepower Museum. I've never been into trains but I think I might be coming out of the locomotive closet. I thought the model railways were incredible and with immense attention to detail, the scenery told many stories beyond just a train circling a village. Best of all though, I'd discovered a small scale railway which you can actually ride on. It's round the back of an electricity sub-station in Falconwood and not many people know about it. They have a few open days coming up so we can go for a ride, but we'll have to be quick as it looks like they're going to be moved on from this site. I'll have to blog more on this later.
As if I'd not endured enough excitement for one weekend, my trusted source confirmed that the Plumstead Live! music event is for real. This is the icing on the local cultural cake and promises to be a major date in Plumsteadshire's social diary. Hey, it might not be Glyndebourne, but it's here on our doorstep so let's spread the word. 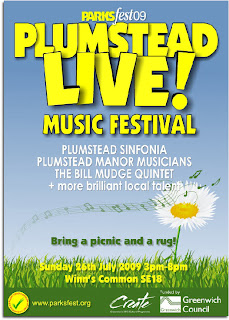