Being a nice afternoon, I went to Greenwich Park. I took Toddler Pangloss to play in the swing park there.

Whilst TP was walking up a ramp, a group of 3 older (maybe 8 or 9 years old), children came running around on the ramp. TP stopped at the top of the ramp to watch them/keep out of their way. They then thought it was great fun to climb onto the roof of the activity with their skateboards.

Before you could say "Lorks a lordy I told you so", one of these boys ran into Toddler Pangloss and TP fell backwards and off the activity. A fall of about 2 feet - might not look that high to you & I but it's significant to a toddler.

I shouted at the top of my voice at the child whilst checking that TP hadn't fallen awkwardly and broken anything. I was pretty annoyed. I knew I'd broken the Summer atmosphere of the play park, but I just didn't care; it was instinctive. The boys had already been warned that they were being dangerous.

I spoke to the boy's father about this and he seemed unrepentant about what had happened, stating that it was an accident and that this is what happens in play parks. I accepted this, but then mentioned that we warned they were being dangerous and they chose to carry on being so. The father then put the blame in my court saying that if I want to avoid accidents then don't bring TP to play parks. I thought this was a little below the belt and said that I know children will get over-excited, but the parents need to monitor their little darlings, which he had not.

What an unfortunate way to end Sunday.
Posted by Doctor Pangloss at 9:42 pm 15 comments: 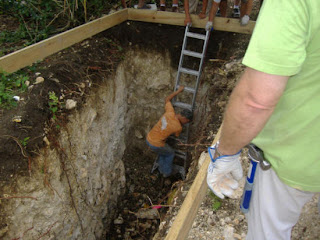 Just a couple of months ago, signs were put up along Plumstead Common Road to give advance warning of road works during July & August.

Oh well, at least it'll happen during the school summer holiday when the road will be quieter.

As we head towards the end of August, we've only had a stretch of road from Macoma Terrace to the Co Op dug up and filled in. Hmmmm, so I guess Thames Water will be putting in temporary traffic lights and diggers when the school run is back and can annoy lots of people. Either that or they've decided that our pipes are in tip top condition and have cancelled these works.
Posted by Doctor Pangloss at 2:06 pm No comments:

I've a good mind to phone Greenwich Council about this. Fortunately, it's the same bunch of people and fortunately, I know where they live. I don't hold out much hope that anything can/will be done about it though.
Posted by Doctor Pangloss at 10:29 pm 21 comments:

I popped into Woolwich yesterday. Not my choice shopping experience, but I'm really interested in the development of the town centre. The Royal Arsenal is nice, but bores me; it's all very predictable and unashamedly cuts itself off from the rest of the neighbourhood. 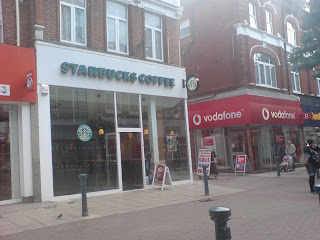 The redevelopment of General Gordon Square will be interesting to follow and the DLR will be a great asset to the local infra-structure. Oh, of course there's a huge glass building going up opposite the town hall.

Whilst we're in Woolwich, I must mention one gem of a shop. Harry Perry Cycles. It's a proper bicycle shop and they know what they're talking about. Once I've saved up my pocket money, I'd like to go and buy a custom made bike from them.
Posted by Doctor Pangloss at 9:37 pm 12 comments: