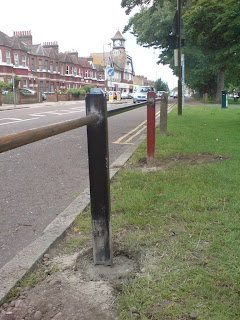 At long last, the broken posts on the common have been replaced. I actually quite like the red primer colour.
Posted by Doctor Pangloss at 8:39 am 1 comment:

The festival season has started. There are the usual suspects - Glastonbury, Notting Hill, Womad & Womad, The Palio and of course to kick it all off, The Plumstead Make Merry.

I know what you're thinking. Why the hell is The Palio nestling in amongst such giants of musical celebration and cultural awareness? Point taken. I'll have to don my Alan Sugar cap and approach my researcher; pointing my finger I'll speak the words, "YOU'RE FIRED."

The Make Merry seemed rather good. I'd imagine that the organisers have to keep it relatively small scale so as not to steal the thunder from Notting Hill later in the year. It's a noble gesture and works well. The new logo has grown on me. I always quite liked it, but now I really like it. The quirkyness of the imagery is quite fun and sinister at the same time, although sinister in an Aubrey Beardsley kind of way, rather than an Austrian cellar kind of way.

Aligned with this quirky Victorian tone of voice is my favourite attraction from today's event, that of a Victorian-styled sideshow. I don't know who they were, but they wore scary prosthetic noses and juggled etcetera.

I was annoyed that I missed Westcott & Rodway. I saw them at last night's jazz night and thought they were utterly brilliant. The Pavilion (or Plumstead Common rugby hut), seems to be carving a very interesting and much needed cultural niche for itself. I'm very excited at how this is all going to develop in the next year.

The Comedy On The Common has brought really good comedians to The Shire and we must spread the word. Sunday 29th June. 7pm (Treadstone are working on a poster). Last night's jazz event was a real triumph. The music was superb and ambience was loose and informal. The ale went down quite well too. This could've been a one-off gig, but I sincerely hope not.
Posted by Doctor Pangloss at 10:15 pm 5 comments: