Lorks a lordy. The Shire is slowly becoming the hub of entertainment.

Tonight is the latest One Day Café event. Die Plumsteadshire Festspielhaus (better known as The Pavilion, better known as the rugby club building opposite The Old Mill pub), is hosting a free evening of music and stuff. Doors open at 7pm on the dot.

And to close the 09 Plumsteadshire Biennale we have another Comedy On The Common event. It's the evening of Sunday 26th April at Die Plumsteadshire Festspielhaus.

I hear a saw

The 'Shameless' household have been relatively quiet. Maybe it's because I popped round and spoke to them. Maybe my other neighbours have said things to them. I know I'm not the only one to have spoken out.
Last week, they were sawing away one evening. It got darker. Still sawing. It was night. Still sawing.....
....the macabre side of my brain was really hoping to hear a sudden yelp and see the Shameless carrying a severed leg into the house. The compassionate side was hoping just to see a foot.
Something WAS afoot.
"What's he building in there?" I asked myself.
I thought of the eerie Tom Waits song.
It was night-time and he was still sawing and hammering. What's he building in there?
Posted by Doctor Pangloss at 9:48 pm No comments:

I could just about tolerate noises of the boys next door running around the house past 11pm. Completely unacceptable really but I tell myself that at least it doesn't happen on a school night, just to make myself feel better. (God knows what it's going to be like in the school holidays).
I could just about tolerate God knows whatever music they're playing. Acceptable really, but I'd rather be able to rest in the garden without the awful racket.
I could just about tolerate the Staffs barking. Completely unacceptable as it would be for hours and hours on end, but they were in the house and thus I was afforded a little sound baffling.
Now the dogs are left out in the garden and bark all day long. Toddler Pangloss couldn't have his afternoon nap because of it. We couldn't leave our windows open because of it. This lasted from midday until 9pm. As far as I'm concerned it's not the dog's fault; they just want to be with people.
Having come home from work, I went round and spoke to one of the Staff neighbours who was very apologetic and said they'll see to it.... You know when you speak to someone, they reply but you can see in their eyes that there is no meaning behind their words. Well, we'll see if the dogs bark for another 9 hour stint tomorrow.
Bring me a shotgun. 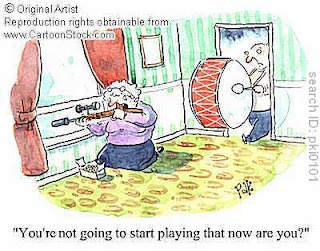