I have heard about one or two very, very serious incidents around Plumstead. I've heard that there have been attempts to grab children off the street, and [I think], bundle them into a car. I think this has happened around primary schools, but I don't know if it's happened in the morning or afternoon.

I'm pretty sure the children were without their parents, but don't know if they were alone or with other children.

It's very difficult to report this without being alarmist about it. I don't believe the World has become an uglier place, and do believe such incidents happened when I were a child. I remember being told not to take sweets from strangers. I remember this message from my parents and also learning this from watching TV.

People. Don't go around thinking that every car is suspicious, but just be careful. If I get time tomorrow, I'll contact the Safer Neighbourhood Team to see if they are either aware of it, or ready to hop into their panda cars when called.
Posted by Doctor Pangloss at 8:15 pm 7 comments:

Labels: on a serious note

I never did like punk, but oddly I really liked Malcolm McLaren, however I liked his Duck Rock and Paris phases, which weren't punk at all [Dr Pangloss' stream of consciousness blogging, hence contradicting oneself in one single sentence - ed.].

MM passed away today and I feel a tiny loss, which is slightly odd as I've never met him. The two albums mentioned above have been in my record collection for decades and still get played. They've stayed with me as I've moved through different musical phases.

Once, I was on a flight from Charles De Gaulle with MM. I wasn't WITH him, but he was a few rows away, and I just wanted to tell him that I absolutely love Duck Rock. I didn't but always wish I did. 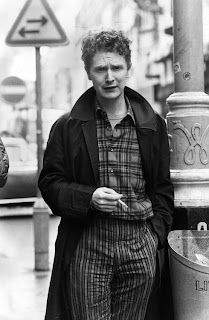 I've been meaning to blog about the Greenwich Children's Theatre Festival but something called Easter got in the way. Isn't that a pip?

Sounds like a lot of great children's shows and many happening at The Tramshed in Woolwich Village. Yes, that's pretty much on our doorstep. Wahooo...... Don't know if they're all booked out or not, but worth asking. I have taken a poll around the offices of Plumsteadshire HQ and 'Penguin' comes out on top. It's a brilliant little show with excellent songs. None of that plinky plonky tosh played on a Casio VL-Tone that is just condescending to toddlers. This is the real deal.
Penguin. Thursday 8th April. 11am & 2pm. Tramshed
I really wanted to see Tales From Old Japan, but the requirement of going to work sunk that idea.
This Saturday afternoon promises something special. A puppet show called Panfilo Pipintu will be performed in General Gordon Square and beamed direct to the Grauman's Chinese Theatre in Hollywood where Tom Cruise will......
...... oh, my mistake. It will be shown on the big television screen in General Gordon Square. Take a picnic along, sit on the grass and pretend you're at Glyndebourne.
Posted by Doctor Pangloss at 5:04 pm No comments: