I'm suffering from an addiction to The Apprentice.
Of all the hateful, back-stabbing idiots, Michael Sophocles really really annoys me.... to the point of being ill.
Posted by Doctor Pangloss at 9:45 pm 3 comments:

One lovely listener, GMVP of the Shire has put out a request for helping hands. Come on!! You appreciate the loveliness of this green and pleasant land and now you can give something back. Come on!!!! Splosh some paint around, make new friends. Goddamn it, if you're single, you never know what might happen. 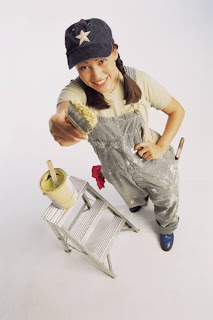 We urgently need volunteers for another (hopefully final) push to get the Slade Ponds fence painting project finished. We are holding an additional fence painting session tomorrow - Saturday, 24 May - at 11am. Please bring family, friends, and even strangers who fancy helping! You need only come for as long as you can stay...1/2 hour...1 hour...2 hours.. A little over half the fence panels have been completed, with the hard work of several volunteers, including 3 or 4 committed volunteers who have come every Sunday for the past several weeks. If you've walked by the area you'll see how smart the painted sections look (and how shabby the unfinished sections are!). If you can't make it tomorrow (Saturday) we will also arrange for paint and supplies to be available on Sunday and Bank Holiday Monday. Come along, spread the word, and help make our shire more beautiful.
Posted by Doctor Pangloss at 4:01 pm 2 comments:

My Treadstone ops have worked through the night on this ad. 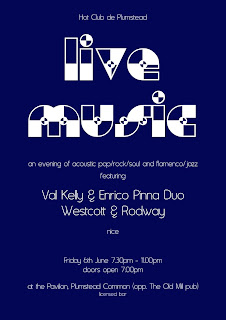 Posted by Doctor Pangloss at 8:48 am 4 comments:

My sources at GCHQ have intercepted a communiqué detailing a live music event STOP Venue is the rugby club pavilion on Plumstead Common STOP Date of event is to be Friday 6th June 2008 STOP From 1930hrs to 2300hrs STOP Doors open at 1900hrs STOP Entrance fee is seven pounds UK sterling STOP Genre is flamenco, jazz and pop/rock/soul STOP

I am REALLY looking forward to this. I'd prefer some Sonny Rollins and Bobby Hutcherson but hey, I'm sure Val Kelly & Enrico Pinna Duo and Westcott & Rodway know their stuff. I'd never heard of Ronnie Golden, but had an excellent evening of comedy last weekend.

I'll get my Treadstone operatives onto the job.
Posted by Doctor Pangloss at 10:12 pm 1 comment:

Just to pick up on a couple of topics which may get lost in the comments from the lovely listeners.

Good dentists.
I use the Slade Dental Practice on Garland Road. Surinder is a really nice fellow. Always has a smile on his face whilst drilling & filling.

Good evening.
The next comedy night is on Sunday 18th May. That is this coming Sunday. The comedy is hot and the beer is cool, so what better way to cheer yourself up after burning yourself to a crisp whilst falling asleep on the sun lounger?
Either email at comedyonthecommon@ntlworld.com
or
phone after midday on 07860 609796
Posted by Doctor Pangloss at 12:53 pm 15 comments: 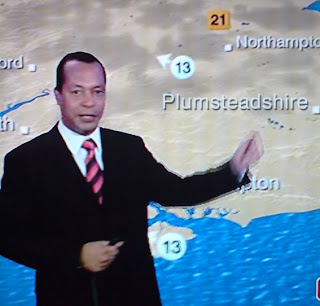 I watched the electronic television set this evening and waiting for Michael Fish to appear after the news reports, I was facing a man called Jay Wynne.

Weather reports used to be subdued and homely; Ovaltine for the ears, if you get my meaning.

Mr Wynne rattled through his report like a gatling gun on the frontline. He's incredible. He was kind of singing it at us too. I've never known anything like it. If I couldn't understand the language, I'd have much enjoyment just hearing his singing style.
Posted by Doctor Pangloss at 11:12 pm No comments:

Finding God in the Co Op

The refurbished Links Co Op is a pleasant improvement over the old one. Well I should hope so, otherwise what's the point in a refurb? Removing the product shot window vinyls has improved visibility into the shop and thus makes it look more inviting. Moving BWS (beers, wines & spirits), and having a mid-floor wine display in the window adds to this enticement.

The F&V (fruit & veg), offer seems to have expanded, or maybe I'm imagining it? Walking straight from the Links boulevard into the 'fresh zone' is always a good thing. A really nice touch is adding two product categories - Wholefoods and Free From on the shelf ends. This may be lost on most shoppers, but I'm really pleased to see that these are here. They tip the balance from Co Op lurking in the Londis/Costcutter bracket and moving into being a proper supermarket. Love it.

The lowered ceiling makes a huge difference to the feel of the store. It's cosier (well, cosy in supermarket terms), and the lighting seems better on the eye. They could have mixed lighting accents through the categories, but hey ho. Looks like exterior signage has yet to be installed, or is the exposed cabling a feature?

Having shopped, I was just disappointed by the state of the checkouts. I'd walked around a refurbished store with new fixtures, layout, graphic treatments, lighting, then at the final hurdle was tripped up by old tills. The belts still had graffiti on them for God sake. This is a pretty big deal and simple to address too. Just change the belts or clean the graffiti off maybe? Detail, detail, detail. Come on people!!!! 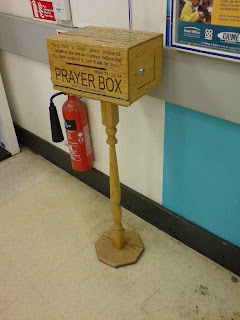 My final point is not of disappointment, but I feel a loss from this store. The old store had a prayer box by the notice boards. I never understood why this was there. In my past, I'd seen lots of collection boxes in supermarkets, like the 1950's looking blind boy with a dog - a guide dog I guess. This was a nice looking object, then there are those hideous UFO dishes with the swirling red & white pattern - pop a coin in the slot and it will swirl around the shallow cone (like the water swirling into a plug-hole - Hitchcock did a great homage to this in Psycho - ed.), eventually dropping in the hole in the centre. These have featured in supermarkets, but a prayer box? Do people kneel and say a few words next to the fire extinguisher?

I like it though.
Posted by Doctor Pangloss at 9:10 pm 8 comments: