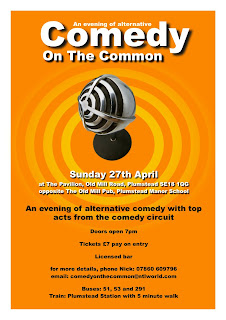 It's the comedy night this coming Sunday in Plumstead Common!!!! Yes me dearios, you heard it right, live stand-up comedy in The Shire.
I've been meaning to post the flyer up on this blog but it's a Word document and I guess you need Microsoft Orifice to open it. With this in mind, I have produced a jpeg version of it and here it is. Before the law-suit comes flying at me from the event organisers, I will now say that I have taken the liberty to 'jazz it up a bit' without asking their permission. So just for the record, this version of the leaflet is produced by my design team (let us refer to this crack team as TREADSTONE), purely as a frivolity and does not superceed the existing Comedy On The Common brand identity. I thank you.
Posted by Doctor Pangloss at 11:10 pm 3 comments:

I like stuff like this. I've just come across a blog called Photoshop Disasters. It's a tad geeky, but what the hey. If I find a blog raving about custard tarts du monde then I will have to bring to your attention - hmmmm.... custard tart geek..... I scare myself sometimes.
Posted by Doctor Pangloss at 8:44 pm No comments:

At the weekend, I met up with some friends and went to a Thai restaurant in Brockley. It's a place called Just Thai Thai on Brockley Road. The interior is shabby chic, the food quite nice, but God almighty, what a wait for it to arrive. We must've waited over half an hour for our first course and that's pretty lame considering there were just eight other diners in the restaurant. The main course was spectacular though. Over an hour and a half waiting time; I'm sure my hair had grown a few centimetres in the duration.
Posted by Doctor Pangloss at 8:31 pm 2 comments: 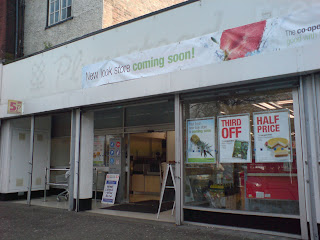 The Links Co-Operative supermarket is going to close for about a week. This is to allow for an interior refit.

Black is the new white. Black has dominated the world of supermarket design and epitomises 'high-end'. We'll be able to enjoy a plush new shopping experience with new fixtures, lighting, checkouts and the longest champagne bar in Plumstead.

Here are some spy shots. 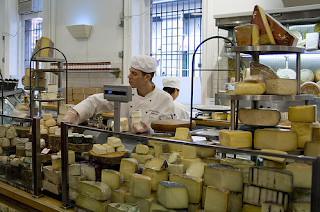 Not of Co Op, but the iconic Dean & Deluca. Oh well. Dream on. 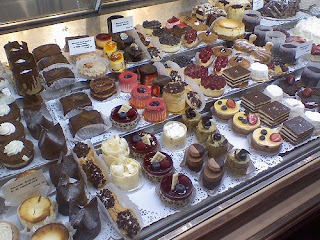 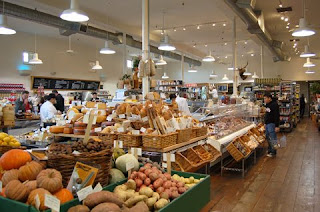 A lovely listener has sent in some photos of the recycling centre opposite the Links Co Op. What a mess. In fact, you can almost hear the passing chap shaking his head and tutting as he looks on disapprovingly.

If people want to help themselves to a backless Balenciaga, then do it with some respect. Want a free transistor radio? Well, close the door after you've browsed, I mean were you born in a barn?

I guess this all falls on deaf ears as I doubt the self absorbed knuckle dragging numb skulls who create this mess only read (that's if they can read), blogs like selfishgit.com. So who (quite literally), picks up the pieces? The council. And who's going to pay for this? Us.

There is something quite satisfying about bring back the stocks. 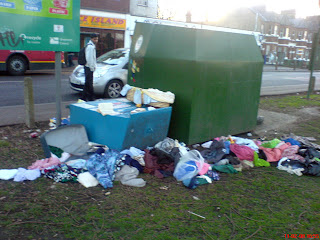 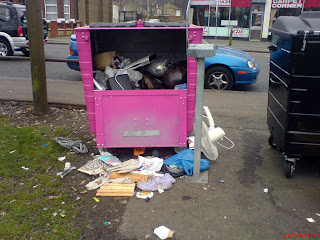 This particular soft play is in a distant land called Becken Ham. It's OK. Nothing special. It's a large warehouse space filled with a great big modular soft play framework. There's a small merry-go-round and a very small kart track. No frills and only general ambient lighting. These places should be fantastical and theatrical.

The café. Appalling food!! The sandwiches were dire. Flavourless and bland to look at. I had, what I thought was, a BLT. The bacon was about 97% fat - I expect fat, but really. The tuna ciabatta was just that. The Italian bread was limp and the tuna was straight out of the tin. A little mayonnaise or butter might have been a basic requirement. And this is food which would be served to children. Shame.

It's not a cheap place to visit yet it was very busy, which is not at all surprising as there's very little choice for comparative activities. Shame. Standards have been kept low and this grates me because the visitor experience should be of paramount importance.

I have been to another one though, it's called Kidspace and this is how it should be done.
Posted by Doctor Pangloss at 11:13 pm 2 comments:

A quick one.
We know there's been some ransacking from the recycling bins opposite the Co Op on Plumstead Common Road, but has anyone seen it happen? If so, when has this unofficial recyclefest happened? Is it a regular occurrence? Why not cut to the chase and tell me who's taking this stuff and leaving a pile of mess around the bins.
Do tell. This information (believe it or not), is going to be useful.
Posted by Doctor Pangloss at 12:00 am 8 comments:

The internet is a queer old thing. I write this quaint little blog about a quaint little corner of Londonshire, not knowing where my lovely listeners are.

Having just checked the ridiculously complex hit counter, the only section I understand is the map of the World - it's a pretty picture, okay. This tells me that I have a lovely listener in Poland, one in Egypt, one in Pakistan, one in Mexico, one in the U.S. Virgin Islands (where the hell is that?). Of course, there are a few more in the UK and US of A, but I'm still wondering why someone in the Virgin Islands would be reading about daily murder and bloodshed on the streets of downtown Plumsteadshire? They must think The Common is like a township of Brazilian favelas. 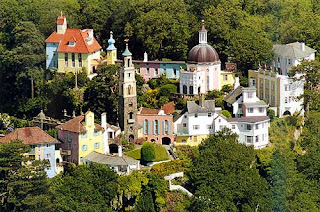 Dear Sir or Madam of the Virgin Islands,
Plumstead Common is NOTHING like the hit film City Of God. Here, the men doff their bowler hats and lay down their capes as genteel ladies promenade around the Common. [This can either be interpreted as either an early 20th Century idyll or a scene from The Prisoner].

I've just been flicking through the Plumstead Stories website. It's a really good site paying homage to the Plumstead of yesteryear.

And doesn't the building look great? I also love the flags strung between the building and the neighbouring house (where the car park entrance is now located). Or is that Aunt Hilda's washing? 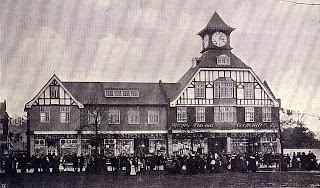 Posted by Doctor Pangloss at 1:26 pm No comments: