Popped down to the Millenium Dome today [I just can't call it by its' new name; that's just too much free advertising].

By the way, did I mention that Apple make the gorgeous iPhone? Yes, Apple. The iPhone is this year's Christmas gadget must-have. It's not cheap, but it'll be non too shabby neither. And one more thing, it runs OS X. Available from all good...... actually, I don't know where to get it, but what the hey?

Dome. That's right. I wanted to see the developments at this venue and also to see the Beach. It's to bring sea-side fun to Londoners who can't afford Margate - now that is really saying something. Given that the Dome has just opened, I expected something fairly spectacular, to give us a wow factor, just to shake off the Dome's bad history. I expected a glistening beach with a wave machine creating a bit of a sea - you can't build much of a sand castle with dry sand. I expected heat and fake sunlight and even a backdrop of a blue sky.

We've got a huge pile of play sand with a couple of fake palm trees. The theming goes as far as a few shark's fins and a raft made from an old wooden pallette. Every expense was spared. It's a dire effort and hugely disappointing. I don't know if this is our version of the Paris Plage?

If you want to take your children for a half day out, join a queue at the Co Op, it's more fun.
Posted by Doctor Pangloss at 9:18 pm 1 comment:

A listener is wanting to know about a sculpture in the playground of Plumstead Manor School. If anyone does know (in the next hour), then ring or email the show.

I did say it's a last minute request.
Posted by Doctor Pangloss at 2:02 pm 2 comments:

I was obviously very focused on work today; it suddenly struck me that I've not eaten a custard tart for a few months. I'd not gone through 'cold custard', or even had a hankering.

My last indulgence was finishing off a Marks and Spencer ECT (Egg Custard Tart to the uninitiated). This M&S brand of ECT was recommended by one lovely listener and it certainly delivered, but I do think the pastry chefs at M&S HQ were trying too hard. I found it was a little too flamboyant for my likings.

The Sainsbury's ECT still wins head and shoulders above the rest. The Waitrose offer was just way off the mark with a kind of wholemeal pastry. I mean, what's all that about? Showboating is just not de rigeur when it comes to such culinary basics.
Posted by Doctor Pangloss at 11:11 pm No comments:

I came across this news story concerning Lord Levy today. I'm sure it's of great national importance, but I'm not interested. However, what caught my attention was how much LL looked like Kenneth Williams.

Did LL ever utter the phrase "'ere, stop messing about?" 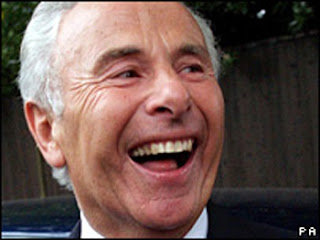 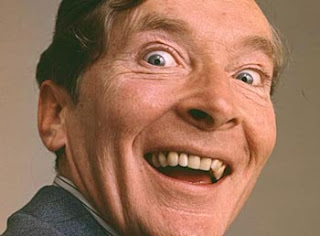